Making money for Charity. Why Morzine’s community is so great!

‘Perhaps it’s the force of the mountains, the quality of air or just the general generosity of people and willingness to get involved?’

Morzine has a community which is slightly different to many other places in the world.

Above is a quote we wrote in today’s release of our latest Facebook event : Peace & Dove present The Jungle Jam at L’Aubergade. The quote is about Morzine’s community spirit and why the town is just so amazing at supporting people less fortunate. 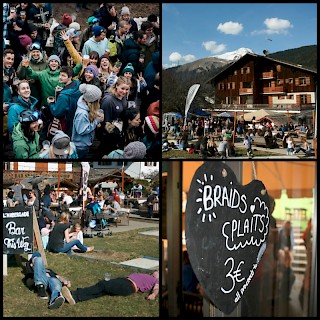 Amazingly we found out the figure is just over €4000 since April 12th last year!

This money has helped hundreds of people through distributing the fundraising to L’Auberge Des Migrants, The Cystic Fibrosis Trust, Snow-Camp and Protect Our Winters. Collectively we have also thrown events for a family made homeless by the 2015 Nepalease earthquake & a local house fire in Le Biot. In both cases this money went a huge way to helping the families when they needed it the most.

What we just want to say is a MASSIVE thank you to everyone who has come to our events in the past and for Morzine’s locals & seasonaires for being so amazing!

So THANK YOU everyone who has drank a toffee vodka shot for charity at our bar!

Thank you all the bands that have let us donate their band fee to charity!

Thank you for all of the charity raffle donations from local companies!

Thank you Morzine for getting involved in each and every event we’ve put on. From liking and sharing on Facebook to the people who have helped organise the events!

We’ll keep the charity events going on if you keep making them so special!